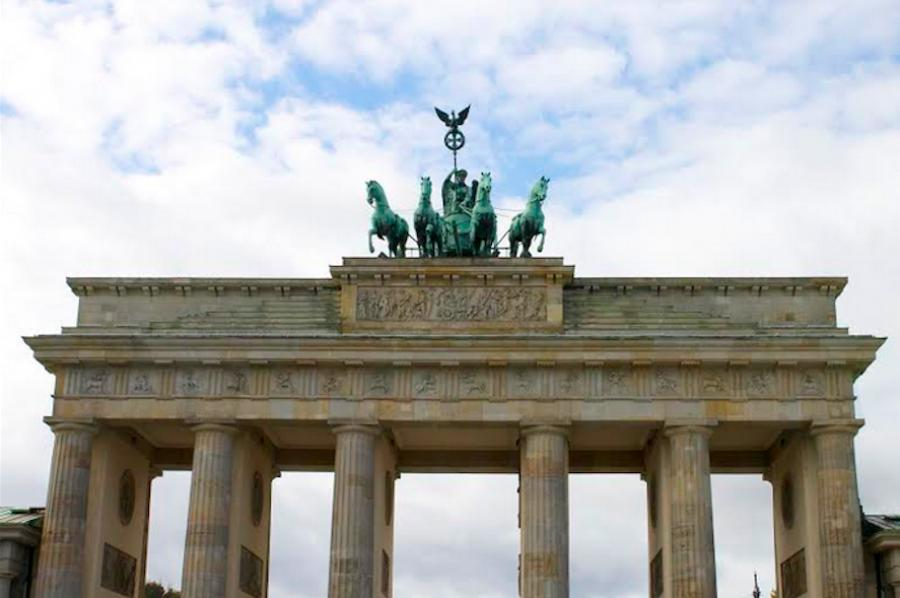 The Brandenburg Gate by Katherine Price

This article was written by Katherine Price, published on 27th February 2014 and has been read 3440 times.

The Brandenburg Gate (main photo, above) is a symbol of Berlin that will always remain in my memory, a beautiful neoclassical piece of architecture commissioned in the 18th century by King Frederick William II of Prussia as a sign of peace. It was completely cut off from both sides of Berlin during its partition and stood in the middle of a no man’s land.

It was the first ‘sight’ of Berlin I actually had, dropping off my parents at their hotel on my first night. It was a source of comfort. I had a horrible first few weeks – I ended up in a horrible, dirty flat and had to look for a new place to live with not long at all before term started. My parents had gone back to Wales, I had no friends in the city, I was in a new place adapting to a new language and culture, and I was not eating properly. It was hell. But every time things felt impossible, I came and sat down in front of this for a good cry.

For me it was a reminder of how amazing the city was, how much potential it had, and it kept me there. In the end I’m so glad it did. I made some amazing friends, had an amazing time and I saw, heard and learned things I never would have otherwise. And my German is pretty damn good now, too. 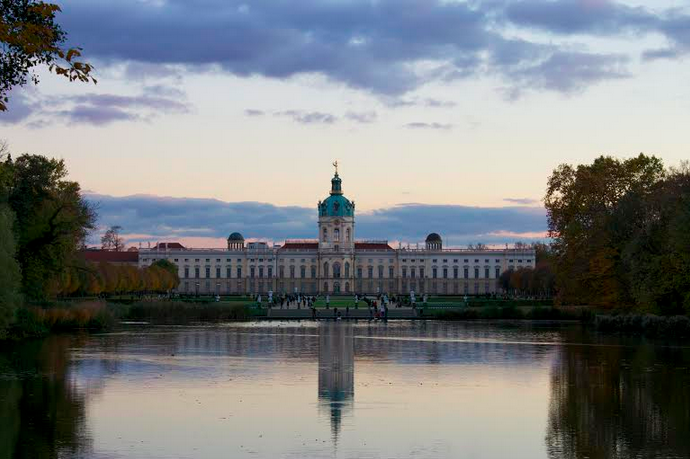 After visiting a flat during my house hunt, I found this beautiful palace and the huge park surrounding it. I fell in love with it immediately. It must have been a sign; I got the flat, and this beautiful park was less than ten minutes’ walk away. A lot of people say that Berlin is not a ‘beautiful’ city, and while I can understand how it may not be considered ‘typically’ beautiful, I also think that they could not be more wrong and they clearly did not visit places like this.

I spent countless hours wandering this place – whether jogging, showing friends around, visiting the palace and learning about Prussian history, or just to have a wander and take a few photos. Built mostly in the 17th and 18th centuries, this palace has a fantastic history reaching back to the Prussian monarchs, the extensions that each monarch made and even up to huge damages that happened during WWII. It’s well worth a visit, even if just to see the porcelain room covered floor to ceiling in porcelain! 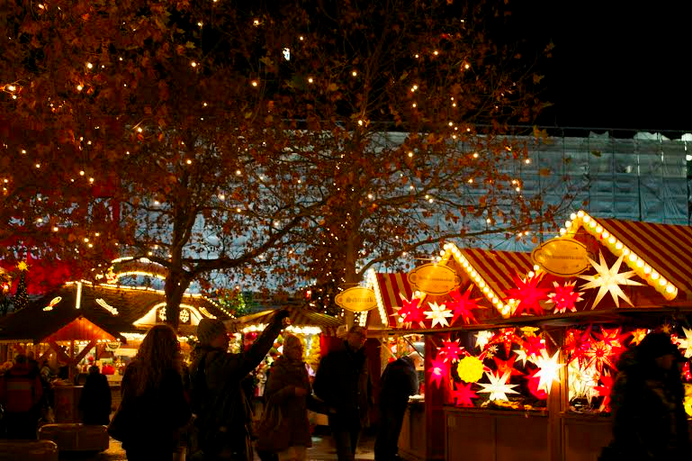 Berlin at Christmas is a magical time. Dozens of markets spring up all over the city, lights are strung through all the trees, there’s germknödel, glühwein, roasted chestnuts… it’s wonderful. It’s also extremely cold. But it’s so worth braving the cold for the food, drink and amazing stalls, and no two markets are alike.

There’s the old-fashioned Christmas market just off Unter den Linden, a stunning market in the shadow of Charlottenburg palace, there’s one at Potsdamer Platz, Alexanderplatz, near the Kaiser-Wilhelm-Gedächtniskirche, they are everywhere. One of the biggest is just outside of the city, in an area called Spandau, and is great for missing out on the big crowds the city centre can attract. The most beautiful Christmas market is supposedly Gendarmenmarkt.

Wherever you go, it’s a fantastic time to visit and each market holds some great memories for me – looking over the palace as it’s lit up with a cup of hot chocolate, drinking eggnog on Alexanderplatz and chatting with German strangers and spending an evening at the old-fashioned market with a group of some of my closest friends – and then having to huddle inside a café because it was too cold to stay outside. 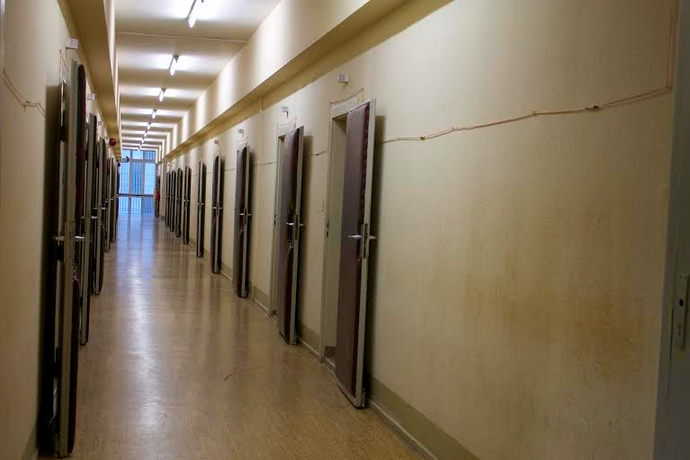 Berlin of course has a huge history, from Prussia to World Wars I and II, and existing as a divided country. This is a photo of Hohenschönhausen, a Stasi prison used when it was East Berlin. Berlin’s Stasi history is not as well known as its history during WWII, but it should be. It’s both fascinating and horrifying, and should really be wider understood than it is. People here were tortured emotionally and mentally, rather than physically, had information extorted from them, and were often left as informants for the Stasi. A terrifying percentage of the population was under surveillance of some kind during this time.

Berlin has some really fascinating historical landmarks, like Charlottenburg Palace and the Brandenburg Gate from the Prussian era, a museum commemorating resistance movements during the tyranny of the Nazis, Sachsenhausen concentration camp, among others. The city is excellent at properly commemorating its history. By understanding the city’s history, I felt like I was better understanding the city that I was living in. 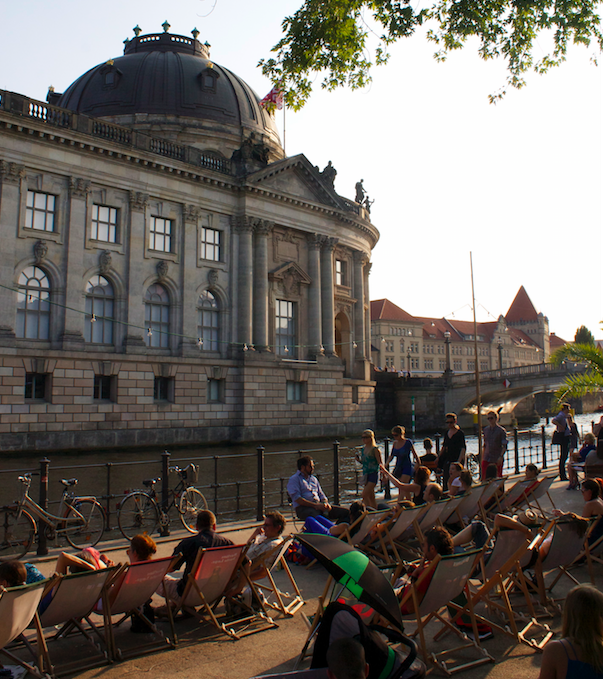 This picture has twofold importance for me. Firstly, you can just about make out the beach bar on the riverbank. This is one of Berlin’s many crazy concepts – dump a load of sand on a river bank, set up a bar, add in a few deckchairs and, hey presto! Who needs a beach? My boyfriend brought me here on the evening of my 21st birthday after an evening at the opera, and my parents and I chilled here with beers during my last week in Berlin. That was one thing I loved about living abroad – getting to show around my friends and family whenever they visited, knowing exactly the best places to go and where each particular person should visit. For them, it was a holiday. For you, home.

Berlin has so many crazy things – a Viking bar where you can drink mead out of horns, a swimming pool built right in the middle of a river, and at one point an ‘art installation’ popped up in the middle of a park. It was a giant bouncy castle. It was amazing.

This photo is also important to me because of the museum – the Bodemuseum. Although this photo was taken in the summer, Museum Island was a great source of fun during the winter. When it’s -14 and constantly snowing, it can be a bit of a put-off to going out and enjoying the city. So, a friend and I made a pact that every Sunday we would visit a museum and go for kaffee und kuchen (coffee and cake) afterwards. It was a way to get us both out of the house, seeing what Berlin has to offer whilst also being able to keep warm, and we made sure we all kept in touch on a weekly basis, even if we were busy or had lots of work on.

Berlin is an amazing city and I would thoroughly recommend that everyone visit, whether to live or to holiday, it really does have something for everyone. I got the opportunity to travel all over Germany during Easter break and saw some phenomenal cities and met some lovely people. Never since have I been at a dinner table with seven different nationalities all at once. I visited the family that I did an exchange with when I was 13 – I had a significantly increased level of German at this point, I could actually speak it – and I found a tree in a park that my grandfather had planted 25 years ago. I would recommend anyone do a year abroad, it’s an amazing experience and you never know what is going to happen.

by Together Travel
Living and working in Germany