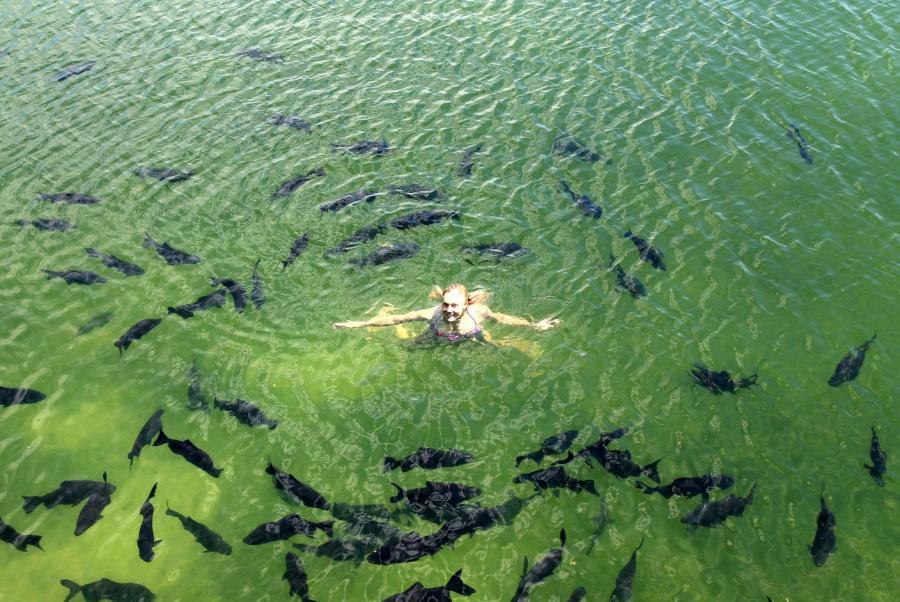 This article was written by Katie Uniacke, published on 7th September 2015 and has been read 4577 times.

Katie is studying Spanish and Portuguese at the University of Southampton, going into her final year. She spent 9 months of her year abroad on an AIESEC Brazil Internship as a Tubing Monitor in ecotourism hotspot Bonito, exploring the area and working on her blog in her free time. She rounded things off with three months travelling through Brazil, Bolivia, Peru, Chile, Argentina and Uruguay. In this piece, she tells us about her fantastic experience working abroad!

Brazilians are everything they’re cracked up to be. Slightly eccentric, open, fun and welcoming. As the only gringa (foreigner) in the village everyone wanted to know my story and I was never short of people to have a chat with in Portuguese over a Caipirinha. My fellow AIESEC interns were from all over (but there were no other native English speakers, score!) and were all in the same boat as me so there were plenty of people in the same boat as me.

Working in such a different culture is never going to be easy, and my internship did in fact end in tears over differences in opinion regarding my contract of 44 hours a week vs. the reality of 66 hours, but I learnt how to stand up for myself and I’m pretty confident I could deal with any work issue that life cares to throw at me. Plus you know you’ve got good at a language when you can have a fluent ‘heated discussion’ in it.

Anywhere else, and in any other job, the heat would have been oppressive, but I spent my days in the crystal clear Rio Formoso (Beautiful River), which was a perfect 21 C and contrasted beautifully with the tropical humidity. It was almost always sunny and when it rained it did it properly, with awesome thunderstorms. Sometimes in the winter, the rain meant the park closed (as no Brazilian in their right mind wants to go tubing, snorkelling or horse riding in weather closely resembling a British summer) and we got the afternoon off. Better than a snow day! 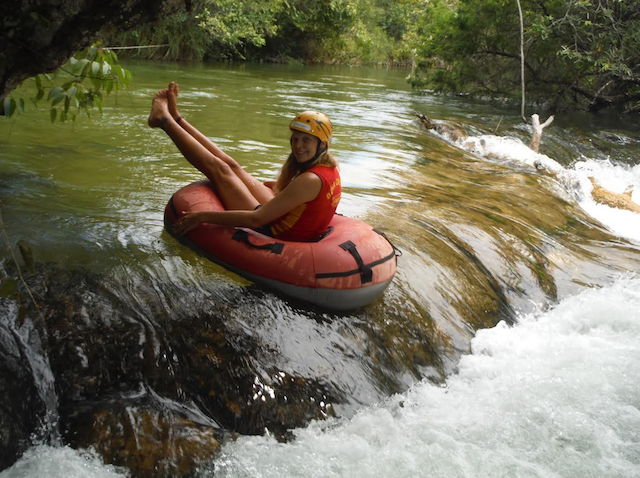 Bonito has flourished since its discovery as one of Brazil’s best ecotourism destinations. It’s the stuff dreams are made of, with incredible caves beneath every hill and springs bubbling up from beneath the earth and forming stunning crystal clear rivers that are filled with fish and beautiful underwater forests of plant-life. It’s a bit of a hike from the nearest airport (Campo Grande, which has connections to international airports) but its right next to the Pantanal, a wetland the size of France with more exciting wildlife than you can shake a stick at.

Think ant-eaters, capybaras, tapirs, armadillos, capuchin monkeys, macaws... At work, we were visited on a daily basis by a macaw called Mel who demanded cake and would sit on your shoulder if she liked you (although she’d try and have your fingers off if she didn’t).

In January, Chiquita showed up. She was a wild boar who’d lost her family and moved into the park. She loved human company and would bark at you indignantly if you tried to go off and have fun without her. On hot days she would join snorkelling or tubing groups for a dip in the river and slide down a couple of waterfalls and on rainy days she’d do the whole 5km horse riding circuit to keep herself warm. She loved a good scratch behind the ears and would roll over for you to scratch her tummy. As you can imagine she became the park’s biggest attraction! 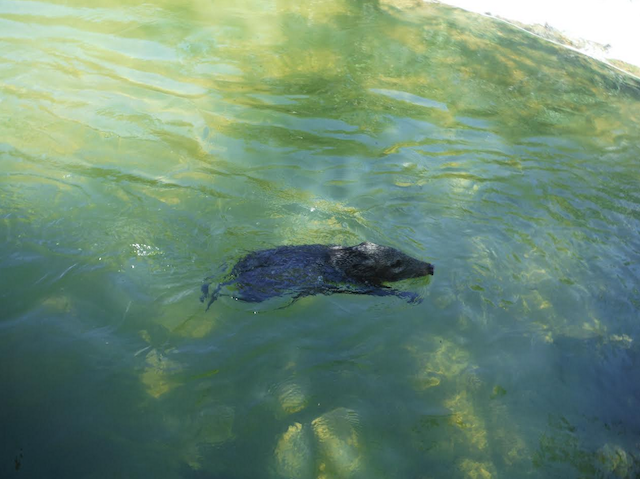 Although I had to do my bit in the park’s reception and run the social media side of things, I was mainly a tubing instructor. This meant me and one other monitor took groups of up to nine tourists on two hour long tubing tours, walking up river and coming down on rubber rings with seven waterfalls and rapids to negotiate on the way. The river was so crystal clear that you could see the shadow of your tube gliding along the river bed beneath you. More than three trips a day was plain exhausting, and I often did four a day in high season, but the tan and the muscles I got from it were a good consolation.

One of the downsides of working in tourism is that in high season you might not see a day off for weeks at a time, but one of the perks was that, when you did get a rest, you could get free entry to some of the other activities in the area on your days off. I went snorkelling, diving, abseiling and trekking and swum in some of the most beautiful waterfalls I’ve ever seen.

I couldn’t have done it without AIESEC. The visa process was a nightmare even with their help, and would have been impossible without it. They had their downsides, but moving to the other side of the world for the best part of the year was a lot less scary with the promise of someone to meet me at the airport. Where AIESEC failed, having the other interns around meant that we had each other’s backs when our employees weren’t playing ball.

As far as Brazil goes, Bonito is hardly party central, but it did its best. The Winter Festival (Festival de Inverno) takes place annually at the end of July and attracts some of Brazil’s biggest stars, with after parties going on until ridiculous o’ clock (and work still starting at 7am the next morning). I swore I would never dance ‘funk’ (a dance involving a lot of twerking and gyrating) but one night the alcohol took over and I’m told I was getting low with the best of them. Unfortunately, it being a small town, everyone knew about it by 9am the next day. We wouldn’t have said no to a few more of them, but every month or so there was an awesome ‘Pagode’ night (samba but easier to dance to) and I discarded all my English inhibitions and danced the night away. 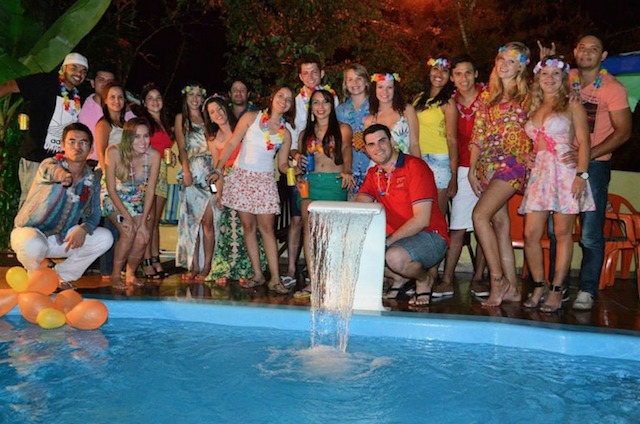 The simplest and best cocktail on the face of the earth. Take either cachaca (Brazilian rum) or vodka (making a Caipiroska), a hell of a lot of cut limes, more sugar than you would have thought necessary, and shake it all up with a large amount of ice. Voila, the tastiest, most lethal cocktail there is. Terrible for your teeth but makes a Brazilian evening out all the sweeter.

My nine month placement started in June and ended in February, giving me huge amounts of time before fourth year started. I spent March discovering Brazil and then popped back to the Brazilian boarder with Bolivia (relatively close to Bonito) to start the next big adventure, a trip through Bolivia, Peru, Chile, Argentina and Uruguay, making it back to Brazil for my flight home at the end of May. Working for nine months with $250 pocket money (cocktail money to be perfectly honest) meant that I didn’t touch my student loan, which came in very handy financing my big trip.

Choosing an AIESEC Internship for your Year Abroad