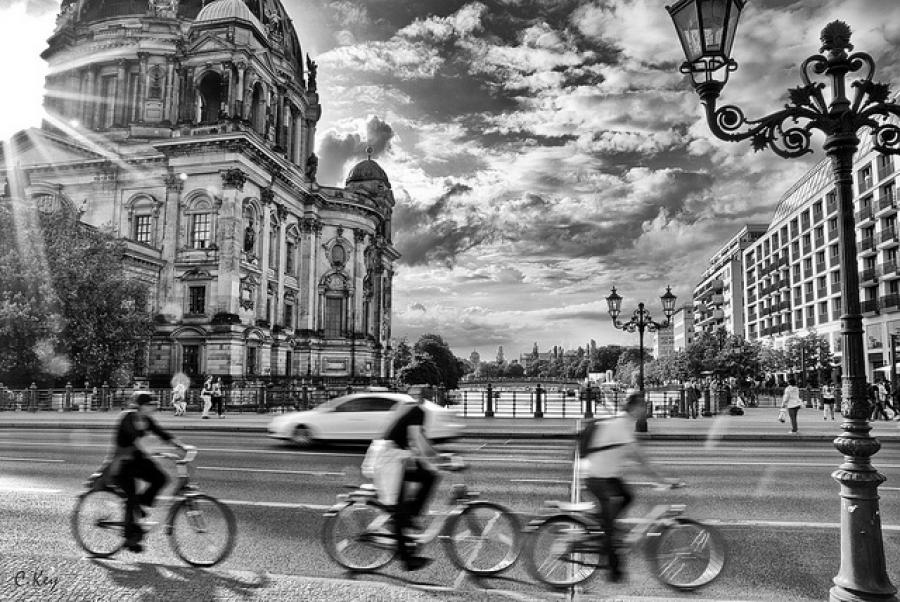 This article was written by Helen Long, published on 25th November 2014 and has been read 46023 times.

Living and working in Germany UK German Culture Shock Nottingham Uni Germany
Helen Long studies German and Spanish at the University of Nottingham. She is spending the first six months of her year abroad as a Language Assistant in Berlin, before moving to Madrid to work at a university. In this piece, she identifies a few of the strange differences between German and British culture that she's picked up on since moving abroad. For more of Helen's observations, visit her blog!

As a prospective expat about to swap Britain for Bratwurst, I was worried about how well I would cope with the surely many different aspects of German culture. Yet, two and a half months later, I still lie in wait of this phenomenon, wondering if it snuck past me while my back was turned. It is more likely that I barely noticed a thing because, frankly, Germany is really not that dissimilar to the old UK.

Nevertheless, I have done my best to dig out the most frustrating, tiny, insignificant differences between the two countries. So sit back and prepare to witness the pettiest list known to man.

1. Do Germans have oven gloves for hands?

Here’s a thing about hot liquid: it is hot. If you put said liquid in a glass and then try to touch that glass, your sensitive human hand will fall out with you. Why, then, do so many cafes in Germany serve their hot drinks in glasses that don’t have handles? You spend hours analysing your tea, approaching it from various angles and wondering just how on earth you are going to pick the damn thing up. Many burnt fingers later, you have no choice but to give up and watch helplessly as your beverage slowly loses its heat, all so you can finally lift it to your face and sip a miserably cold cup of tea.

2. Is the coffee here made from diamonds?

Of course, it’s always nice to enjoy a good cup of coffee at home. Hmm, I could do with a pick-me-up but don’t fancy contracting any third-degree hand burns in a cafe. I’ll just nip to the shop, locate the coffee aisle, hunt down my favourite brand and reach out to grab a pack… Oh no, there’s three inches of glass in the way. I could grab three bottles of vodka in an instant but God forbid I should access a €3 jar of instant coffee without asking an employee’s permission first.

The Germans are ahead of us in many ways. Their innovative, forward-thinking ideas have produced technological breakthroughs the world has marvelled at for years. Amongst which is the most awkward pillow you can imagine. It is basically a large, flat square which deflates every night under the weight of your head. I am genuinely convinced they just cut out a portion of the duvet and whacked it at the head of the bed.

4. Shutters are not just for shops

In a list of things that Germans hate, among wasting electricity and enjoying comfortable pillows, are traditional curtains. Deemed either too thin or too decorative (this is mere muggle guesswork), the common choice of light-blocking apparatus is the rolling shutter. These metal barriers stand guard at most German windows, blocking out every inch of natural light and making a room dark enough to satisfy the most albino of vampires.

I like dogs. So too do the Berliners, apparently. Never before have I witnessed so many pooches trotting around a large, busy city, lead-less and free to frolic among the trams and the buses and the herd of tourists stampeding along the pavement. While many dog owners don’t own leads, they seem to also be distinctly lacking in the plastic bag department and, as such, cannot clear up after their pet. But not to worry, any leavings will soon be removed from the path by an oncoming shoe and so the problem will be resolved.

In the UK, Sunday rarely shapes up to be a very exciting day. The British tend to embrace this and reserve as many boring tasks for this day as possible, such as cleaning, washing the car, completing the weekly food shop. In Germany, only two out of three of those tasks are possible on a Sunday. Nearly all businesses, including supermarkets and pharmacies, hibernate until they reach the safety of Monday morning. Not so great if, like me, you wake up on Sunday morning and realise you’ve run out of toothpaste.

For a country so devoted to recycling and preserving natural resources, Germany doesn’t half get through a lot of paper. If you are planning on living here for your year abroad (I hope I haven’t scared you off, Germany is wonderful really!), you will first get to sample the delights of this bureaucracy during the “Anmeldung”, which is the process of receiving a piece of paper that confirms you now live there. You basically endure a whole lot of prolonged waiting, finally receive a fairly boring result and then carry on with your life as normal. Kind of like watching the X Factor.

8. A queue is nothing more than a letter

Having fallen victim to comments such as “Oh, you’re from England? So, London, then.” and “You guys eat an English breakfast every day, right?”, I’m no stranger to (or fan of) the odd stereotype. However, I’m going to have to hold my hands up and say there is sometimes truth behind the myth. Queuing, for example, is something that continues to elude the Germans. My poor heart is really taking a beating, mostly due to the horror I continually experience when somebody queues not behind me, but next to me.

Ok, I’ll admit, I’m clutching at straws here, but the way the Germans make the bed is… unusual. I don’t even know how they do it. They somehow twist and contort the duvet into thirds, and then accurately place it right in the centre of the bed. Failing that, they will make the effort to make the bed as usual, but then, for no apparent reason, go one step further by folding the duvet in half. Maybe the Germans just can’t nod off without first undergoing a late-night mental challenge which involves unravelling the large piece of origami they left on their bed.

A pavement is usually a safe haven for pedestrians, a place of happiness and car-lessness where the fear of being run over can be left behind. In the big G, however, even if you can avoid being mowed down by determined businessmen on their morning speed walk to work, you still have to contend with the commuter’s version of the Tour de France. Although often granted their own little lane on the road, many cyclists seem to prefer the feel of pavement on their tyres meaning a lovely afternoon walk often turns into a scene from The Matrix.

Despite the amount of moaning I have managed to squeeze into this list, Germany is definitely a fantastic country and a very easy place to settle into. The fact that the cultural differences are so small makes moving here much less of a shock to the system, leaving you the freedom to see what a year abroad in Germany is really all about: the beer.